PyCon 2015 ended over a week ago, so you might be wondering why I’m writing this so late. Well, once again (see my PyCon 2014 post) I blame the location: the city of Montreal. We like it so much that Linda and I planned on staying a few extra days on holiday afterwards. After returning, though, I again payed the price by digging out from the accumulated backlog. It was well worth it, though!

If you weren’t able to go to PyCon, or even if you were there and don’t possess the ability to be in multiple places at once, you missed a lot of excellent talks. But no need to worry: the A/V team did an amazing job this year, and not only recorded every session, but got them posted to YouTube in record time – many just a few hours after the talk was completed! Major kudos to them for an excellent job. 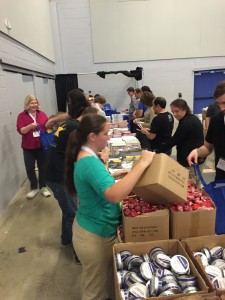 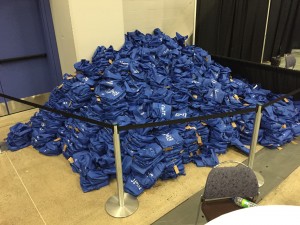 The swag table (top) and pile of stuffed bags (bottom)

PyCon is an amazing effort by many people, all of whom are volunteers. One of my favorite volunteer activity is the stuffing of the swag bags. Think about it: over 3,000 attendees each receive a bag filled with the promotional materials from the various sponsors. Those items – flyers, toys, pens, etc. – are shipped from the sponsors to PyCon, and somehow one of each must get put into each one of those bags. Over the years we’ve iterated on the approach, trying all sorts of concurrency models, and have finally found one that seems to work best: each box of swag has one person to dish it out, and then everyone else picks up an empty bag and walks down the table, and one item of each is deposited in their bag. Actually it took two very long tables, after which the filled bag is handed to another volunteer, who folds and stacks it. It’s both exhausting and exhilarating at the same time. We managed to finish in just under 3 hours, so that’s over 1,000 bags completed per hour!

In between talks, I spent much of my time staffing the OpenStack booth, and talked with many people who had various degrees of familiarity with OpenStack. Some had heard the name, but not much else. Others knew it was “cloud something”, but weren’t sure what that something was. Others had installed and played around with it, and had very specific configuration questions. Many people, even those familiar with what OpenStack was, were surprised to learn that it is written entirely in Python, and that it is by far the largest Python project today. It was great to be able to talk to so many different people and share what the OpenStack community is all about.

Last year PyCon introduced a new conference feature: onsite child care for people who wanted to attend, but who didn’t have anyone to watch their kids during the conference. Now, since my kids are no longer “kids”, I would not have a personal need for this service, but I still thought that it was an incredible idea. Anything that encourages more people to be able to be a part of the conference is a good thing, and one that helps a particularly under-represented group is even better. So in that tradition, there was another enabling feature added this year: live captioning of every single talk! Each room had one of the big screens in the front dedicated to a live captioned stream, so that those attendees who cannot hear can still participate. I took a short, wobbly video when they announced the feature during the opening keynote so you can how prominent the screens were. I have a bit of hearing loss, so I did need to refer to the screen several times to catch what I missed. Just another example of how welcoming the Python community is. 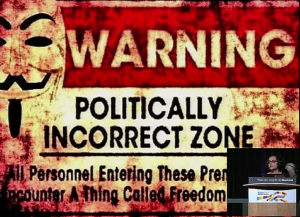 True to last year’s form, one of the keynotes was focused on the online community of the entire world, not just the limited world of Python development. Last year was a talk by John Perry Barlow, former Grateful Dead lyricist and co-founder of the Electronic Frontier Foundation, sharing his thoughts on government spying and security. This year’s talk was from Gabriella Coleman, a professor of anthropology at McGill University. Her talk was on her work studying Anonymous, the ever-morphing group of online activists, and how they have evolved and splintered in response to events in the world. It was a fascinating look into a little-understood movement, and I would urge you to watch her keynote if you are at all interested in either online security and activism, or just the group itself. 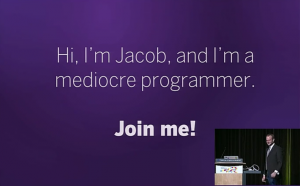 The highlight of the conference for me and many others, though, was the extremely thoughtful and passionate keynote by Jacob Kaplan-Moss that attempts to kill the notion of “rockstar” or “ninja” programmers (ugh!) once and for all. “Hi, I’m Jacob, and I’m a mediocre programmer”. You really do need to find 30 minutes of time to watch it all the way through.

This last point is a long-time peeve of mine: the notion that programming is engineering, and that there are objective measurements that can be applied to it. Perhaps that will be fodder for a future blog post…

One aspect of all PyCons that I’ve been to is the friendships that I have made and renewed over the years. It’s always great to catch up with people you only see once a year, and see how their lives are progressing. It was also fun to take advantage of the excellent restaurants that the host city has to offer, and we certainly did that! On Sunday night, just after the closing of PyCon, we went out to dinner at Barroco, a wonderful restaurant in Old Montreal, with my long-time friends Paul and Steve. Good food, wonderful wine, and excellent company made for a very memorable evening. 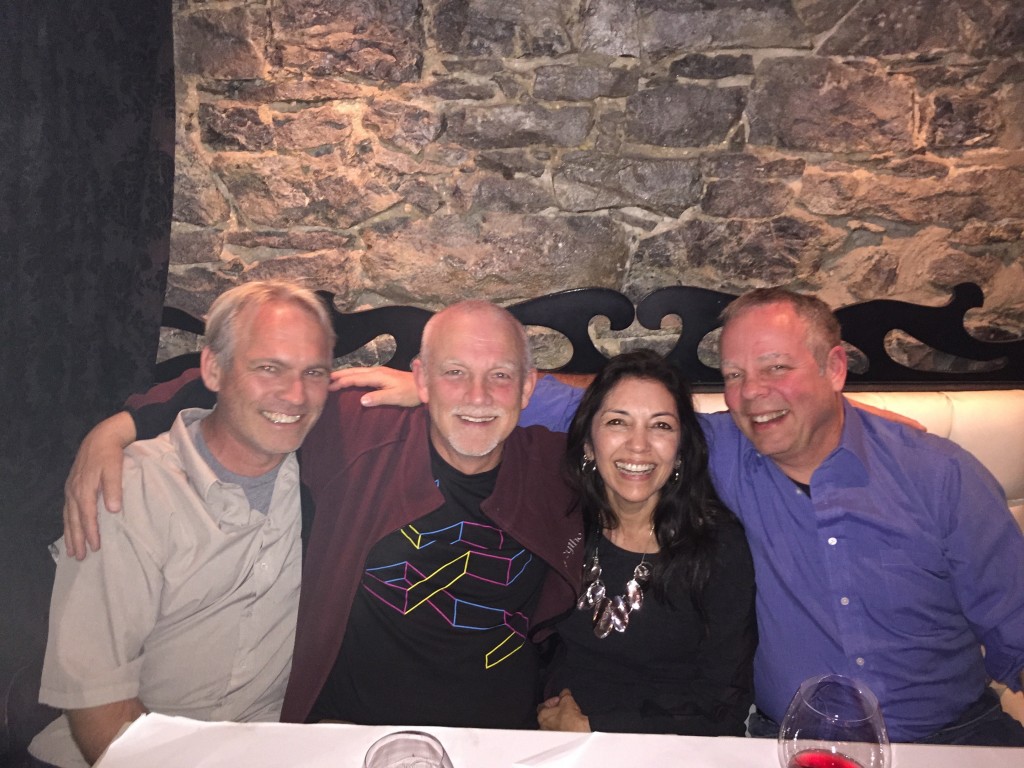 (L to R) Paul McNett, Steve Holden, Linda and me.

This was my 12th PyCon in a row, and I certainly don’t plan on breaking that streak next year, when PyCon US moves back to the US – to Portland, Oregon, to be specific. I hope to see many of you there!